Stress Response: Effect on the Proteome at a Glance

Stress Response: Effect on the Proteome at a Glance

has been given by Jan Heise, PhD, NH DyeAGNOSTICS.

In living cells biotic and abiotic stress is tightly related to production and scavenging of reactive oxygen and nitrogen species (ROS/NOS). Due to their high chemical reactivity oxygen and nitrogen species can oxidize various biological molecules such as unsaturated lipids, carbohydrates, nucleic acids, but mostly, due to their high abundancy, proteins.

In proteins the thiol group of the amino acid cysteine is a primary target for oxidation events. The other sulfur-containg amino acid methionine and the aromatic amino acids tyrosine and tryptophane are also targets for oxidation, but at a lower level, since they are less reactive.

During the last decade it became clear that protein oxidation is not an irreversible process only. There is much evidence, that reversible oxidative and nitrosative modification of proteins play a central role in the complex protein network. Therefore, particularly thiol oxidation occurs not only due to stress conditions but plays an important role in the redox signaling pathway.

2D gel-based top-down proteomic approaches offer both, the careful separation of complex protein samples as well as the easy visualization of protein modifications.
Saturn-2D™ REDOX is a novel technology for the visualization of thiol modifications of proteins in complex samples. Samples with varying REDOX potential are specifically Cys-labeled and then compared. The existing problem of inconsistent spot matching - unequal binding of fluorescent dyes to proteins with different REDOX potential - is solved by a special Cys-interacting compound (CinC). 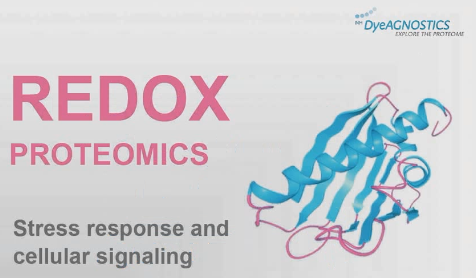 (Recorded and published with speaker's permission.)